We are often interested in infering the topology of a network. Specifically, we want to know which nodes form part of a subnetwork. We can think of a network as a collection of nodes (computers) that connect to some monitors (servers) through some routers. 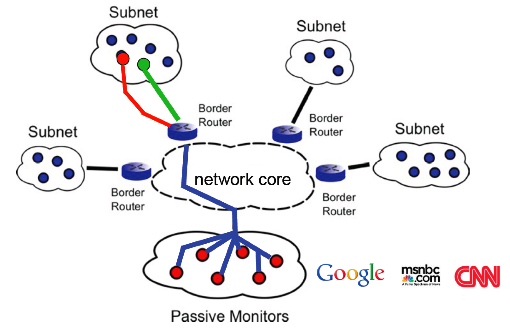 When a node pings a monitor (e.g., google), we can measure the distance (measured in hop counts) between such node and such monitor. We can construct a distance matrix where each row represents a monitor, and each column represents a node. The ith column gives the distances between the ith node and all the monitors. But since not every node pings every monitor, we have incomplete data.

Hence, these measurements lie in a union of subspaces. If we cluster the columns according to their subspaces, we can determine the subnets.